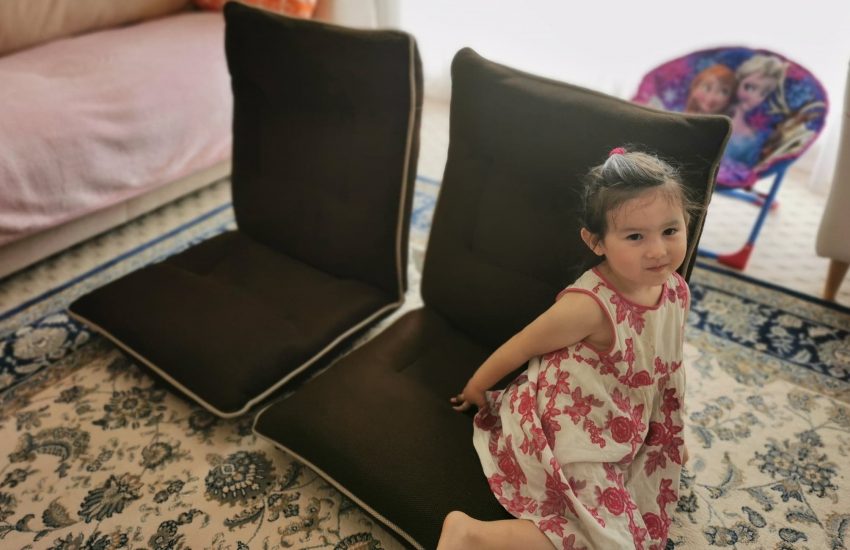 It was a successful day on my giveaway project. The best part was giving something to a friend who really valued it. And I also got something awesome – for free – through my Buy Nothing Project group.

It was hot and muggy all day. Not as hot as the day before, but the overnight temperature hadn’t dropped so my kids struggled to get to sleep. I was still jetlagged and didn’t fall asleep until around 5.00 am or so, and then slept through until 11.00 am. Even after I woke up, I was tired and felt a bit groggy. My Neil said my eyes were bloodshot and bleary. Attractive look!

Some homes have been lost in some of the smaller towns to the south of Canberra. While Canberra is lucky that we have (so far) been spared the worst with no homes lost in the ACT itself, over 25% of ACT territory has burnt. Like most people here, I just want it to be over.

Venturing into the cage

Living in an apartment, we don’t have our own garage. We do, however, have a cage behind our tandem car park in the underground car park. And it’s full to bursting.

I asked Neil recently what he thought we should get rid of. “Those four Japanese chairs take up the most room,” he said.

Yesterday, we (the royal we, in reality, Neil did most of the work) sorted through the cage to find the chairs. We also found a few unnecessary boxes and some stuff that we threw out. I found a few small things I offered on the Buy Nothing Project group. But most of the stuff we kept – we want the Christmas decorations and camping gear, even if we don’t want it right now.

My ex bought the chairs when we lived in Taiwan. We planned to use them in our home in the Canberra suburbs, but they never quite worked. Now that I live in an apartment, there is even less space. We could be especially minimalist and get rid of the sofa and use the chairs instead. But somehow, I can’t imagine Neil – my big Aussie bloke – regularly getting down to sit on the floor to watch the TV.

I decided to offer the chairs to my friend, Martin. Martin and I used to work in the same team. We had a productive working relationship where we would regularly help each other out – not just in sharing work information and tasks, but also supporting each other if we were having a shXXty day. Which seemed to happen more often than either of us liked.

Martin’s wife, Reiko, is from Japan. They have three gorgeous young daughters. As soon as we gave them the chairs, his girls started climbing on the chairs and playing with them. We knew they would bring much more joy to this family than they would be holed up in our cage gathering cobwebs.

Martin’s wife is a piano teacher and a talented pianist. My youngest son (7), without much prompting (he likes being the centre of attention) happily got up to play a piece he had been learning with his piano teacher.

Then Martin’s wife gracefully agreed to play for us. She has a real gift. I was incredibly moved by her passionate, flowing rendition of a piece by Schubert.

We had a lovely time at their place, and I was glad to have remained in contact after I left that work to embark on a writing and podcasting career. Workplace friendships are odd. Often, you are constrained about what you can talk about or share while at work. And yet, when you are no longer physically in the same place, it is easy to drift apart.

Later that evening, Martin messaged me as follows:

Thanks again for the chairs. Reiko recognises the brand and said they are similar to the ones that her grandmother used to have. We’ll invite you over for green tea or home made sushi sometime so you can use the chairs again. The kids enjoyed meeting your family and are still speaking about it.

Who would have thought that chairs that were filling up room in my small cage would remind someone of their grandmother? This experience was one of those days when I really felt that my #joyfulgiving366 project was significant and worthwhile on a deep and meaningful level.

I never know when I will have a good giveaway day on Buy Nothing. But generally, given that many people work from Monday to Friday, the weekend is an optimal time for giving.

On day 36, I gave away a small stool. My kids used to stand on this when they were little when they brushed their teeth. We don’t need it anymore: I have another footstool (and a step ladder) that I use when getting things down from cupboards. I’m only 4 foot 11 inches in height, so a footstool is a necessity. But I don’t need more than one.

The lady who picked it up plans to paint it blue. She will use it for when guests come over as additional seating.

She is also one of the admins for our Buy Nothing Project. I put my hand up to also be an admin late last year. I’m a bit overcommitted in terms of my community involvement. But I feel passionate – deeply – about sustainability, my community and the importance of slow giving. So I’m finding the time. We had a useful chat about our little community and how it is growing. All of us are busy people but we make time where and when we can.

Which is, I believe, the secret about being involved in a community. When you see the opportunity to become involved, take it and do as much as you can. It is rarely perfect, but if everyone helps out just a little bit, a lot can be done.

In this super hot weather, my kombucha has really taken off. It’s a bit mother of a thing that has spawned more than one baby SCOBY. A lady from my group came and picked some a SCOBY. I got my original SCOBY from my Buy Nothing Project group, and I’ve gifted it to many more people in my group. An added advantage of gifting it on so much is that if, for any reason, I kill mine I can always ask for another:)

Then I received something from my Buy Nothing Project. I kept seeing interesting red tartan designs while window shopping designer stores in the Salamanca district of Madrid. I so wanted some red tartan – and then lo and behold, someone offered me this super cool headband for free. I just love it!

The lady who gave it to me is currently working on projects to protect local wildlife and habitat from the bushfires raging in the Namadgi National Park. Several wild animals have been caught and transported interstate until the fires are over. “They’re really frightened,” she said. “They’re wild animals. It’s even harder for the ones we can’t catch who might not survive.”

She’s also working on a project to capture seeds to help regenerate the area after the fires. She said the problem is that the flora is unique and we don’t yet know and understand all the species there are. The scale of the bushfires also poses a problem to both wildlife and habitat – it’s on a scale that is unprecedented and beyond the normal cycle of burning and regeneration.

Sundays seem to be a good day for giving. Do you enjoy decluttering on a weekend?