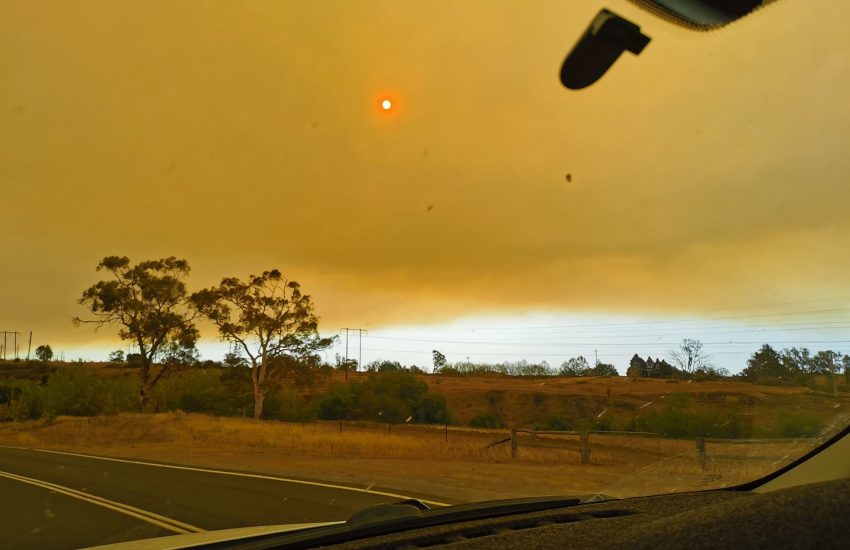 It was the last day of the school holidays for my boys. And in the evening, I gave away some things to my inlaws.

What a summer holiday it’s been!

It’s been a long and difficult summer for the boys. I pulled them out of the last day of school in December because of the smoke from the bushfires and high temperatures (from memory 40C). Three days before school was due to end, my seven year old had breathing problems. It came on as thick smoke spread into Canberra. The smoke was so bad that it set off the fire alarms at the ABC Studio (a block away from our place), and the news anchorman did the news reading outside by the side of the road. I called the ambulance, worried he was having an asthma attack. Thankfully he was fine, just panicked. I kept him home from school the next day, and then took both of them down the Coast (to Tathra) to escape the heat and the smoke, in search of cleaner air.

At the time, I remember thinking “well, this will all be over soon”. And honestly, with the Talleganda State Forest fires (which threatened my inlaws) nearly out, I thought the worst had passed. In reality, the worst had only just begun. Only days after we made the trip down the Brown Mountain to Tathra, the road was closed and hundreds of people congregated in the Bega evacuation centre.

Now it’s back to school, and yet, it feels same same. Like none of us feels like we have really had a holiday. Of course, we’re safe and none of our property hasn’t burnt down. Just, it’s been so crazy and so many Canberra families are feeling a bit on edge. And I’m sort of feeling like I gave up work to focus on writing/podcasting, and yet much of my time has been looking after stressed-out kids and worrying about the next crisis. I guess life is what happens to you while you’re busy making plans.

The kids spent all day lounging at home while I did writing and stuff. They declared it was a ‘pyjama day’, which basically meant a day in undies as that is what they slept on. I alternated between feeling like a bad parent and being happy that they had unstructured time.

I also did a bit of baking. My sourdough starter over fermented and turned to alcohol during the heatwave. After nurturing it with three feeds a day, it finally came good. I celebrated slightly cooler weather by baking a batch.

Several friends said they wanted some of my starter so I’m planning to share some of this around in coming weeks.

In the late afternoon, we drove out to see my inlaws, who live on property around 45 minutes from the Canberra CBD. They’ve just come back from a short cruise, and Neil hadn’t seen them since he has come back from Spain.

The smoke rolled in heavy from the fires to the south of Canberra as we drove out. The wind changed direction – and picked up – and Canberra was really lucky that fires to the south didn’t spread. I’d forgotten for a while what living with smoke haze was like.

My parents in law are lovely people, so I had an extra special gift for them.

An old ice-cream container full of food scraps. I’ve started collecting them for their chooks. I sort of started doing this in the past, putting them in plastic bags at the bottom of my fridge. But I kept forgetting. I’m hoping my new, ice-cream method will be more effective. When it gets full and if we don’t see them for a bit, I will give scraps away via Share Waste.

My kids love to help my father-in-law feed the chooks and collect eggs. And my father-in-law often gives me cackleberries to take home. Before you ask, cackleberries is a navy term for eggs. He served as a navy cook during the Vietnam War. The Royal Australian Navy has a whole vocabulary of its own, including food terms. It’s a fascinating, rich history.

I also gave my inlaws two kids books for their great-grandkids: Hairy Maclary from Donaldson’s Dairy and Watch Me Throw the Ball by Mo Willems.

Both of these used to be favourites when my boys were young. I’ve read both to them many times. Awwww, they used to be so small and cute. Part of me wanted to hold onto these books, for memory’s sake to remind me of what it was like to have young kids. But why? Really, they don’t need them anymore and I would much prefer they go onto other kids who would enjoy them.

Plus I gave them my inlaws this plastic bucket thing.

They use these in Japan and Taiwan for pouring hot water over your back when you are in the bath. Since we don’t have a bath anymore, this was just clutter for us. Clutter I have help onto for three years. It has been sitting on top of my front loading washing machine, and several times a week I have needed to move it around somewhere to make space for the washing basket. And yes, it’s taken me until now to realise that it wasn’t bringing me joy in my life.

Do you have clutter that you stare at every day that doesn’t bring you joy?