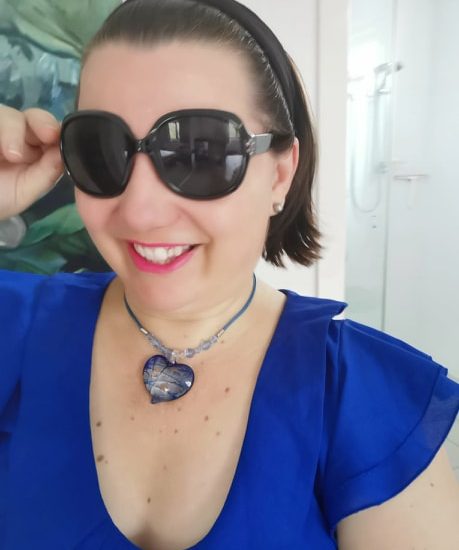 I’m a month and a half into my challenge. And in terms of numbers, it’s going well. But I’ve hit a big snag: nearly everyone I know is saying no to new stuff.

I’m really proud and happy to be helping to demonstrate that happiness doesn’t come from things. And I’m so glad that the message of less stuff is resonating. But for my #joyfulgiving366 project, it kind of sucks.

My good friend, Trish, announced earlier this year that she is not allowing any new clothes into her house. At all. And now my sister, Spring, has said she isn’t going to buy any new clothes for a year. My sister – the op shop Queen who always has a new outfit at every occasion (and always looks fabulous) – is not buying any clothes this year. Wow.

And it’s not just them. It’s harder to give away via my Buy Nothing group, and it’s harder to give away to friends. I have to think really carefully about what their needs and wants are and be prepared to accept if their decision not to take my stuff. If I’m going to downsize and live with less stuff, I have to respect their right to choose the same.

In the last few days, there was an interesting article examining the reason for so many failed retail stores. The article quotes Kogan boss Ruslan Kogan saying that the business models of many retail shops was stuck in the past. “The way that I see it is there’s not doom and gloom out there, there’s just good retailers and there’s poor retailers,” he said.

And the ABC put out an article, which on social media was captioned “if you’re saving like Greta, you could be hurting the economy“. Poor Greta, all she is doing is trying to pay off her mortgage. She didn’t know she was killing the economy. “I’d like to pay the house off, I’d really like to get that mortgage done and dusted.”

Several frugalistas have pointed out that’s what is missing here is an acknowledgement that Australian consumers, by and large, are realising they don’t need so much stuff. They’ve watched Marie Kondo, they’re trying to be minimalists, and they realise they joy doesn’t reside in things. One friend, Rebecca Tregurtha from the Family Footprint Project noted insightfully “We need to move beyond an economy that relies on continuous consumption and endless growth“.

It’s a new trend: Australian’s realise they no longer find happiness in ‘stuff’. And that means that the traditional economic model, the way we chart growth and prosperity, is changing.

Despite the difficulty in giving, I still managed to give away some stuff.

On Monday, I met my former colleague, Katina, for a catchup and also to get some of her views about how I can better communicate the frugalista message. You may recognise Katina from my July 2019 newsletter.

We had lunch at the Canberra Casino. I haven’t been there in years. My ex-husband used to work as a croupier when he first came to Canberra. He met lots of interesting people, problem gamblers mostly. He would often point out people in the street who he had seen in the Casino. “See that woman over there with two small kids? She was at my table until 5am on Saturday night.” Far out, I never realised how addictive gambling could be and the destructive impact on families.

The reason for a frugalista to meet at the Casino is that it hosts an especially good Chinese restaurant, Natural 9, which offers a great 25% off discount in the Entertainment Book. It was also close to her bus stop and was especially quiet at lunchtime.

Katina also doesn’t need a lot of stuff, but I managed to give her a dressing gown and a top leftover from the clothes swap I hosted in January. “You’re just being a conduit for stuff flowing through,” said Neil. “You’re not really getting rid of anything new.”

Maybe, but at least I am doing some things. Bit by bit.

On Tuesday morning, someone from my Buy Nothing Project group came to my place at 8.00am to pick up some sourdough starter. I had it all ready and waiting for her. We were up at 8.00am anyway, it was the time that worked.

I’m also pleased to report that my friend Evangeline has been using the sourdough starter I gave her. Doesn’t it look fab?

One of the good things about giving away starter is, not only do I get to share it with my friends, but if something ever goes wrong with mine, I’ve got backup. Win win.

How to buy the right clothes

On Tuesday afternoon, I visited Jane from StyleEdge Image Consulting. I met her at Business at Breakfast, and she was keen to catch up for a ‘one on one’ to chat about areas of commonality. I was hoping to be able to give her some clothes – or some of the chocolate cake I had just made for Australia’s Best Recipes – but no such luck. She was on a cleanse so wasn’t eating chocolate cake, and was also culling her clothes.

We had a great chat about life, love and clothing – particularly the importance of choosing the right clothes. “Rightly or wrongly, people judge you within three seconds,” she said. “Most women don’t understand that when they dress, it is because they want to project one of around seven different types of appearances. They need to understand what they want to project, and also what colours and styles look good on them.”

She believes people, women in particular, spend too much money on clothes that don’t suit them. “In a store, the shop assistance just tells women they look fabulous, no matter what they try on. It’s not genuine. I create a safe environment where women can try on clothes and get honest feedback.”

This is her ‘girl cave’ she has created with her clothing range.

Style is a personal thing, but sometimes you need a second opinion. Which is why I was so honoured that my friend Erna accompanied me to Today Extra last week. Just having an honest opinion is great.

A (younger) friend I used to work with said she had a Facebook Group with a number of her close friends. They called it ‘Gal Pals’. When getting dressed of a morning, they would take selfies and send it around asking for opinions. She said it was a great way of getting feedback from good friends who would support and be honest. I think it’s a great idea. It’s especially difficult for women to navigate work office clothing politics. Is something too revealing? Does it project confidence? Overconfidence? Is it too bright? Too boring. There are so many things to consider, and good friends can help with that.

I hadn’t given away scraps via Sharewaste since January, mainly because I’d been away and then had given scraps to my inlaws. But my pile of scraps was piling up, so en route to go swimming at my favourite pool, I dropped off some more scraps. It was so easy – it was on the way anyway, so I just cycled past and dropped them off. Makes me wonder why I didn’t think of doing this years ago!

On Tuesday night, I went to a thought-provoking event on Food Waste hosted by the Australian Academy of Science. I’m sharing here because it was pretty fabulous.

There was a lot to unpack in these talks which were delivered by Mark Barthel, a special advisor at the Fight Food Waste Cooperative Research Centre, and Dr Polly Burey, a senior lecturer in food science and a chemical engineer at the University of Southern Queensland. I’ve included a live link to the event here, as its a must-see for anyone interested in these issues:

Some key facts and takeaways:

Dare to have courage

And finally, in my busy week, I was out again. (I was complaining to Neil that I felt like I was forever doing housework, and he pointed out I’ve actually been quite social. I do a lot around the house though as well.)

This time, I was attending the second event in a series run by @Winederlust. This series is called Live Your Best Life.

This event was about confidence, although as it turned out it was more about courage.

This is me with the incredibly inspiring Bree Element from C!News. If you live in Canberra and haven’t heard of C!News, you’ve been living under a rock. It launched last week and had 23,000 views in its first day. Yep, that’s right. This is the new, real news that Canberrans are reading in their lunch breaks. Or not. Bree is an amazing storyteller and her love for this place shines through.

And I hate to admit it, but I have gained more than I gave away the last few days.

Op shopping is again a culprit. I’m still on the hunt for an elusive glass pyrex jug. I’m sure I’ll find one soon. It’s probably cheapest if I just go to Kmart and buy one, and I plan to do that soon. But for now, I’m being op shop tempted. Even on #FrugalFriday!

I didn’t spend huge amounts, and I’m not sharing it all as at least one thing was a present. But it included sunglasses ($3, Cancer Council for kids – love them), and a fabulous glass blue heart-shaped necklace I’ve worn three times already.

And then a lady in my Buy Nothing Project – the same one who gave me my amazing red tartan headband – gave me a table runner. Not only that, but she dropped it off to me on her way to work. Got to love that!

If I had to total what I got in versus what I gave away, I’d be in the red. I’m finding it hard to give things away in a meaningful way – but isn’t that kind of part of the journey of giving in a mindful rather than an indiscriminate way?