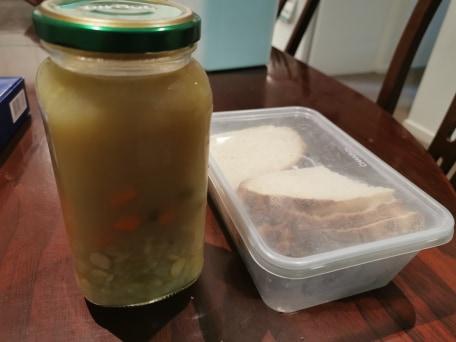 Have you ever been sick, or been really stressed, and had a friend drop around some home-cooked food? I have, and I pay it forward with love.

My eldest son, now ten, was born two months’ prematurely. Not only that, but while he was healthy when born, he developed an infection and nearly died on his first night. I was only able to stay in the hospital for a short time, and then we would commute back and forth every day delivering breastmilk and spending time with our baby.

During this time, I got a bit worn out. Quite worn out in fact. And I was ever so thankful that a friend in my (ex) husband’s Rotary club made some delicious meals, which she dropped off in an esky at our door.

I often ponder that experience. People often rush to buy cute baby clothes or send flowers to people who are in the hospital. But often what people need is some nourishing, restorative food.

My (now) husband, Neil, used to work in a team where everyone got along really well. They remain close friends. One of that group has been in hospital recently with pneumonia. That’s real pneumonia, not a CoVID-19 related infection – he started showing symptoms before the coronavirus became a thing. Last Friday he was released from the hospital to head home. He doesn’t have family here (he’s unmarried and his parents, who don’t live in Canberra, are elderly and unwell), and therefore he doesn’t have much support here.

One of the reasons I love my husband so much is his values. He didn’t hesitate to go into hospital and pick up his friend – even though we were in the middle of a torrential rainstorm. And as he left, I bundled up some homemade chicken soup and sourdough bread to pass on. Since then, I have made more chicken soup for his friend, and also some turmeric chicken rice. We always have an abundance of food, so this is no big deal – I just make extra, although that said I’m conscious of making things that are going to be good to help fight his infection.

When hubby was in hospital two and a bit years ago, I was appalled by the quality of the food. I understand they need to cater for hundreds of people, and cost considerations, but there didn’t seem to be many nutrients in what he was eating. Plus eating homemade really sends a signal that someone cares for you. I would get better knowing that, what about you?

Before we headed back from our inlaws, I cut Neil’s hair.

We’ve been talking for a few years about me cutting his hair. He is at that stage in life where, as a man, the hair on his head isn’t quite as abundant as it was before. He’s not self-conscious about it, but when he goes to a barbershop, they often worry he is. Consequently, he often complains that some strands of hair on top are longer than he would like. (I.e. the barber doesn’t want to cut them off in case he will get offended.)

He had a spare pair of barbers clippers at his parent’s place, so when we were out there we went on the back deck and I cut his hair. I was so nervous! Luckily, mother-in-law was on hand. She was much more enthusiastic about it than me and helped with the tricky bits. She also cut her husband’s hair. “I wonder why we didn’t think of it before,” she said. “He hates driving into town and finding a car park just to get his hair cut.”

I don’t do nearly as good a job as a professional hairstylist. What they do is wonderful. I am going to suggest my Neil goes back for a trim, and that I shave his head in-between. But not bad for his first attempt, if I do say so myself. And he saved around $30.

OK, not so frugal confession: I love jewellery. An

Buying myself flowers. These purple beauties were

Looking for love and want to meet someone wealthy?

We might be on a $100/week challenge, but we still

Back in Australia after our trip to the US and its