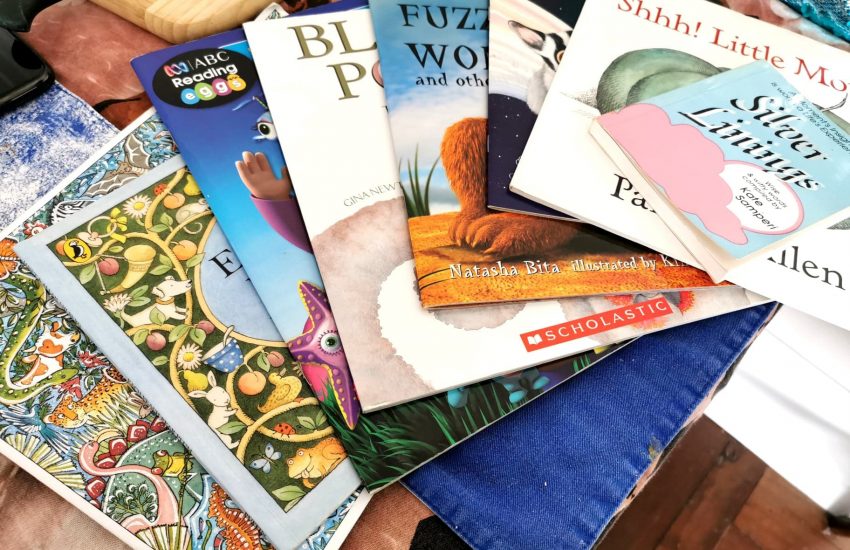 When I launched my #joyfulgiving366 quest on 30 December, I could not have predicted the extreme events of 2020 – and how they would impact on my giving quest. Yet slowly, bit by bit, I’m giving things away and decluttering.

In recent months I’ve slowed down the pace of giving, in part due to concerns about potentially passing on more than just a tangible gift during COVID-19. During the peak of lockdown, I decided to stop giving anything for a while, although I did manage contactless giving of things like sourdough starter, jigsaw puzzles and home learning appropriate gifts.

During #stayathome, I had a ‘donation box’ near the front door as a repository of items that I had come across in the house yet no longer needed. I’ve had boxes or bags of sorts, but the idea in its current form comes from Lauren Winzar, who was guest on The Joyful Frugalista podcast.

As I’ve been collecting things during lockdown, I’ve got lots of things to give away, but also a conundrum. Because many people have been decluttering during lockdown, many op shops (especially my favourites) are not accepting new donations. And many of my friends are also discovering the joys of decluttering while staying at home, so they also don’t want to accept a lot of new things.

In recent weeks, I’ve become more social – at least in small settings with appropriate social distancing. Because I live close to the CBD, people have been dropping around unexpectedly. I usually offer them things from the donation box, but I also respect their decision NOT to accept anything. The whole point of the challenge is to be helpful and to pass things on with love – not to burden people with stuff.

Despite going slow on the giving, to date I have managed to give away – 349 items Yep, that’s a lot and I’ve done it in less than six months. And it built up bit by bit by bit. I went through all the posts from this year. It was interesting to observe how I felt about the stuff I’d given away. With the exception perhaps of the Japanese garden jigsaw puzzle, most things I kind of went ‘oh, yeah, I remember that – it was nice’ but I haven’t missed them. Nope, I haven’t missed things at all. And I feel like I haven’t even started to really delve into minimalism.

I still don’t feel like our apartment is any neater, not really, but having less space is definitely a good start. It’s starting to feel more achievable. For instance, after gifting some of the kids clothes I could fit more things in their chest of drawers. And less books has meant that I can now fit most onto our bookshelves.

Bit by bit we are also tackling other bits of the apartment. Today, for instance, yesterday we went through my spices and sauces and had a bit of a reorganisation and cull. In my old house, I had a nice big drawer that was perfect for spices. But in my/our apartment, I don’t have that space. I miss it because it means things are hard to find. That said, if you have less to sort through it is easier to find to start with.

Unexpected lunch with a decluttering coach

Last week, my friend Lauren Winzar the decluttering and organisation coach stopped by unexpectedly. She lives outside of Canberra so is not often in town. We’ve had lots of fabulous FB chats, plus the podcast, but hadn’t yet connected face to face.

She phoned me and said she would be there in five minutes. I tried not to worry about my messy apartment, which with one child (then) still learning from home was less than perfect. I mean, she’s in the business of order and my apartment wasn’t exactly that! Instead, I focused on heating up some foraged mushroom soup and cutting slices of sourdough bread.

What followed was a great (and long overdue) catchup. I wasn’t going to include her on my tally, but she insisted I include lunch. So I have.

And I continue to give away clothing, yet somehow I still a lot more. This time it was the lovely Jeanene from Winederlust who called around for lunch and a chat. The apartment was still less than perfect, and this time I had two schoolboys at home (grade 5 son and his bestie from school). I was worried I didn’t have anything for lunch, then I remembered (doh) that I had a loaf of white bread coming out of the bread cooker just as she arrived. That ended up being for the boys; we had a simple lunch sourdough toasted sandwiches and tea.

I was sorry that a Winederlust event I was due to speak at in March was cancelled due to COVID-19, but I’m hopeful that Jeanee will have me back later in the year. She arrived with a bottle of Shut the Gate Rose, from a cute winery in Berridale that we stopped at last year on the way to the snow. I have three favourite rose’s, and this is one of them. Jeanene knows her wine, and she also knows what she likes.

And she also arrived with a giant bag of feijoas. They were so delicious! Again, it’s a feeling like the more I give the more I receive.

As she was leaving, I pulled out my suitcase full of clothes that have been gifted at clothes swaps and managed to find two dresses and a stylish black jacket that fit her. Back in March, I gave her a quirky vintage style yellow dress and yellow daisy earrings to see if she would like it. The dress wasn’t quite right (she is much taller than me!), but she loved the earrings. I am therefore counting them in my tally.

With restrictions easing, we’ve been seeing more of my inlaws. I’ve got in the habit now of always taking a plastic container of scraps with me for their chooks – twice, as we’ve been out twice. It probably seems like a little thing but that’s two whole ice-cream containers full of scraps that would otherwise rot in landfill.

We’ve also taken out sourdough bread twice. I often take things for their great-grandsons, who they look after, as well. This time it was a collection of kids books.

On Friday, I had yummy coconut pumpkin soup with the lovely Liz (Elizabeth) Walton. Liz convenes the weekly Business at Breakfast networking group in Canberra, and also hosts Mums in Business Association Queanbeyan. And she has a chapter in the recently released, Amazon bestselling book Mumpreneurs on Fire Australian Edition. She is a massage therapist and hypnotherapist, and also supports people who are on an infertility journey. This stems from her personal experience of having a baby at age 46.

I took a selection of little kids books to give to her daughter, Willow. And thankfully, I think I chose things she would like. As I was leaving, I had an instinct to grab a turquoise cotton top from my wardrobe that I hadn’t worn for a while. I laughed when Liz opened the door – wearing turquoise earrings and a turquoise top. She likes blue so hopefully the top will work well for her!

We had a lovely lunch – and tea served in her late mother’s china. Isn’t it pretty?

And last night, we caught up for dinner with my good friend Trish and her husband, Bob. Trish pops up in these blog posts a lot as she’s someone I like a lot. She also shares my frugal values, and much of our conversation was themed around things she had given or received via Buy Nothing, or things she had bought from op shops. Unfortunately for me, she’s on a challenge not to allow any clothes into her home at all this year, but I’m still able to give her things for her grandchildren – in this case it was some books.

Like many things on my giving journey, I’m learning that the more I give, the more I get back. On this occasion Trish served us a beautiful dinner that included homemade scallop pies, which harks back to her Tasmanian heritage. I loved the little scallop designs she had created on top of each pie.

When I started my #joyfulgiving366 goal, it sounded really hard. But bit by bit, I’ve started to break it down. Have you ever had that experience with goals?