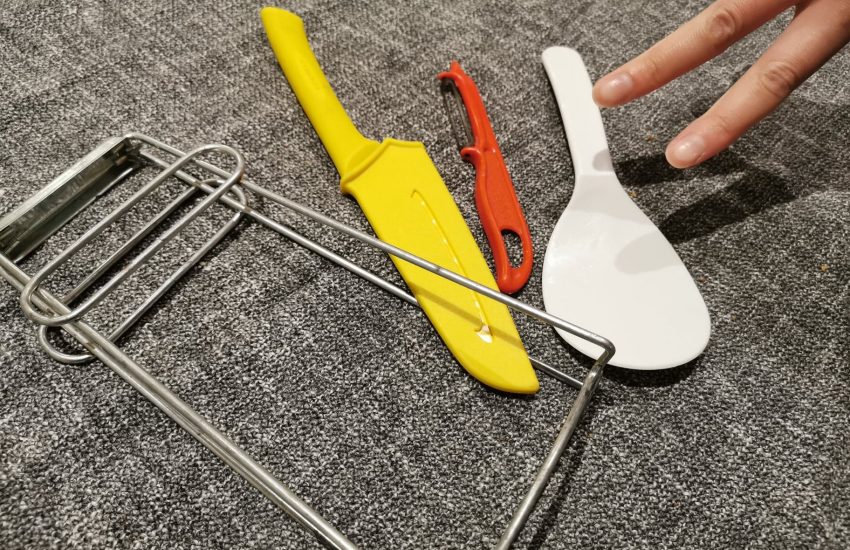 Almost three years on and Neil and I are still combining our two households. And that includes a lot of duplicate kitchen stuff.

A few months ago, we went searching through the shipping container at Neil’s parents place that holds many of the things that Neil had from his former home. We’ve used some of the items to furnish our AirBnB in Scullin, in Canberra’s Western suburbs. And we’ve taken some items to use at home and given some away. There are still many boxes of stuff and items of furniture we can’t easily get to yet, but one thing we did bring back is a big box of kitchen items.

There are only so many knives, soup ladles, potato peelers, rolling pins and can openers you need. I find it kind of funny as many of the items Neil has are things that I was always too frugal to spend money on. Like can openers. In my previous life we proudly used a small metal can opener that cost equivalent of AUD20c. Neil made me get rid of it as he was worried it was dangerous. Neil, however, had a super duper Tupperware one (sells for around AUD60), a MagiCan and several other can openers. Oh the luxury!

A few days I listed a four of the items of my Buy Nothing Project group. Someone contacted me wanting the rolling pin.

When he arrived he said “actually, if you don’t mind, I would like all the the items you posted.”

It turned out he did, as he had just moved into a new place with his apartment. Until that point he had always lived in a sharehouse and hadn’t needed to buy his own kitchen utensils. I showed him the box and he rifled through taking what he wanted.

As he was doing that, my friend Ming arrived. She had also just moved into a new apartment. “Do you have a potato peeler,? she asked. “I don’t have one at home.”

Then she spotted a few more things such as a knife. “I really need that, too, as I was trying to cut something the other night and I didn’t have a knife big enough,” she said.

So without trying that hard, I had a large #joyfulgiving haul.