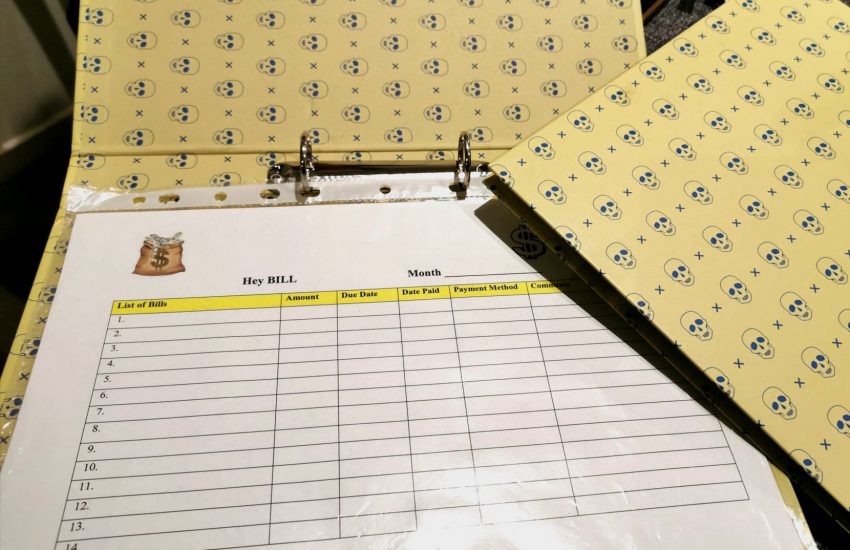 Is your inbox being inundated with End of Financial Year (EOFY) marketing? Mine certainly is. But not all 30 June preparation is about spending money. And this time, I was giving things away.

Last Wednesday night, sales and networking coach, Misty Henkel, popped by to do a Facebook Live on The Joyful Frugalista group. It was a good chat, and as she noted, she could have continued on all night. (You can watch a YouTube version of the FB live above. And if you like what Misty has to say, she also starred on a recent podcast – see below.)

Eventually, we finished the Facebook Live and then we chatted some more. Chatted quite a bit, in fact. Neil noted that when the two of us get together, we tend to chat a lot.

We ended up talking about money, and bills, and her husband’s goal of saving for a house.

“Do you have a bills folder?” I asked.

I gave her a copy of my favourite ‘Hey Bills’ checklist, a plastic envelope and two skull-designed folders. The folders were a gift from someone on Buy Nothing, but as it turns out, I have more than enough. As to Hey Bills, well I grew up in Noosa and we were used to seeing Hey Bill on Noosa Beach. My Mum and Stepdad even have a painting of Hey Bill in their home, so I kind of like the name.

Do you have a bill payment system? If so, does it work for you?