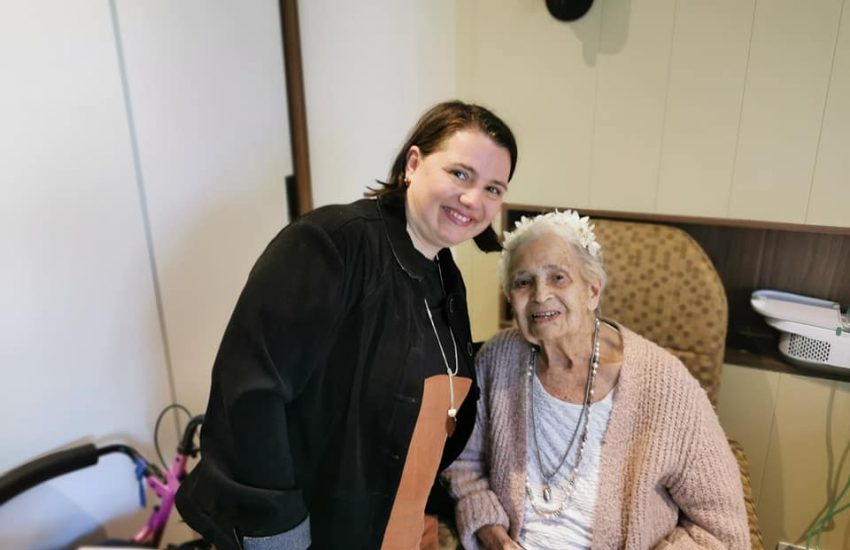 Some of my readers may know this news already. But I was sorry to have learned that my Nana Irene, aged 99, died a week ago last Sunday.

She was 99, so it is natural to be frail at that age and no one lives forever. But when I visited her at her nursing home on Victoria’s Mornington Peninsular in February, she bragged that she was going to turn 99 in June. Her Auntie May lived until she was 103, and she used to talk about how this aunt got a letter from the Queen on turning 100. (I remember as a child going to that party – Auntie May looked so old and frail!) With longevity in the family, and her having talked frequently about reaching 100, the news of her passing at 99 was a bit of a shock. In fact, I didn’t even know she had been unwell.

We are living in turbulent times. When we did a road trip down to Melbourne in mid-February, I had no idea that it might be the last time we would be able to go interstate in months. Things seemed so normal back then! There was no funeral for Nana Irene. I don’t really know much about anything other than one of my aunts told me she was cremated last Friday. Things are so oddly disconnected during these crazy times, and I feel it is difficult to know how to grieve her properly, or indeed how to honour her in the way she would have liked. I know I’m not the only one who is experiencing this right now.

Those who have read my book know that Nana Irene inspired many, if not most, of my frugalista values. She would go crook at me for using more than one tissue (she used handkerchiefs herself, often with elaborate hand-crocheted edges). She rewashed her glad wrap. She poured tea leaves (always Lanchoo) onto her lemon tree, and grew avocados from leftover seeds. I used to laugh at some of her old fashioned ways, but she was an eco-warrior ahead of her time. To her, having grown up during the Great Depression it just made sense to conserve resources.

Back in 1935 when she was a young teenager, Nana Irene (then known as Irene Bolden) won a position at a neon sign company in Melbourne. The company was renamed several times, but was eventually named Claude Neon. According to my Auntie Julie, to win the position Nana had to compete against ‘a room full of college boys’. I can just imagine it – Australia coming out of the Great Depression with jobs scarce, and a room full of tall, educated men – and one teenage girl – competing for a job. She nailed it.

As a junior artist, she worked on the designs of many neon signs. My Auntie Glenda has many of these beautiful mockup artworks Nana created – they look just like real photos, and you can almost feel them glowing. When Nana was 14, the neon sign company was tasked with building a sign for the Skipping Vinegar Girl brand. The head designers needed to study the movement of the skipping rope so they asked my Nan to skip – again and again over several days to get the movement just right. Nan’s mother made her a special dress so that it would flip over as she skipped to get the right movement. As a junior artist, Nan would also have worked on the design.

Growing up in Melbourne, I had seen the Skipping Vinegar Girl sign and heard the story but to me, she was just my Nan. I didn’t really understand the significance, or indeed, how much the sign meant to many people in Melbourne. She made a bit of a splash in the media last week with tributes to her life. That’s my Auntie Glenda speaking so eloquently in this clip.

In many ways, Nana lived a hard life. She had a difficult marriage and my mother and her aunts had a hard childhood. They don’t talk about it much. But a few years ago, Nana described my grandfather as ‘a rotter’ and made it clear she didn’t want to be buried with him (he died over 25 years ago). Nana retained her grace and style and was never downtrodden.

Late last year, I started a ‘joyful giving’ campaign to give away at least 366 items. I have now extended it to 1,000. When we went to visit Nana, she would foist a lot of things onto us as we were leaving – pottery, plant cuttings, artwork, her oil swirl scarves and crockery. Lots of random stuff really. To be honest, sometimes (okay a lot of the time) I didn’t really want this stuff. It wasn’t really cool or it wasn’t my thing – especially the pottery. There was a lot of pottery, most of it pretty quirky. But I loved that she gave from her heart and had unconditional love for me – and for all of her kids and grandkids. I have joked several times this year that my habit of giving people random stuff is kind of like what she used to do. Except perhaps not the pottery. (Dear friends and family, count yourselves lucky I’m not into pottery lol.)

I’ve been pondering how best to honour my Nana. Maybe its in part due to a sense of guilt that I haven’t seen her as much as I perhaps I could of in recent years. I’d been busy traipsing off living overseas, moving interstate, getting married (twice!) having kids and doing the juggling act. Life kind of got in the way. And as much as I loved my Nana, sometimes it was hard work. She was lonely – so lonely that she would stand outside the door and talk to me while I went to the toilet!

To honour Nana, I’ve decided to really lean in and continue this joyfulgiving challenge. I’m woefully behind – basically a whole school term behind – in part due to my new freelance ‘work’ picking up. I’ve prioritised other things, but now it’s back to giving from the heart. Please bear with me as I slowly update and reconnect with some old news. And let me know if you would like to receive something from me!