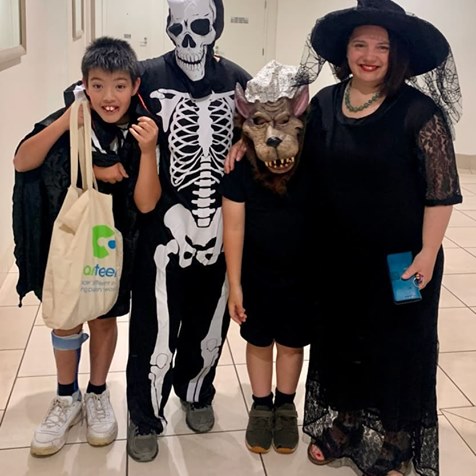 Last night my boys and I went trick or treating – in the rain.

To trick or treat or not?

Do you go trick or treating? Or give out lollies?  I’m surprised at what a big thing it is, especially in the outer suburbs of Canberra.  It’s not such a big thing in the inner-city apartment-central suburb I live in; or so I thought.

I’ve been having a few discussions with people about whether to trick or treat or not. “It’s a North American thing, and not something I grew up with,” said one friend.  Others, on a dieting support group, talked about not encouraging sugar. And if you think about it, we really should be celebrating spring/summer rather than autumn/winter.

Actually, Halloween was brought to the US by Irish settlers. It has its roots in pagan celebrations that mark the beginning of the cooler months.  Growing up, once or twice we went trick or treating around our suburban street in Noosa with older babysitters. We weren’t super organised, but it was super fun.

I’m always surprised and amazed by how excited my kids are about Halloween.  They love getting dressed up, they love the concept of knocking on people’s doors and they love saying ‘trick or treat, trick or treat, give us something good to eat’. Of course they love the sugar, but most years I manage to hide it all before they eat it. They actually forget to eat a lot of sugar.

Putting it out there: for little people I think Halloween is more fun than Christmas.

Christmas Day is actually not that fun. Once the presents are opened, other than over eating there isn’t actually a lot to do.  And yet there is so much expectation that things should be fun, fun, fun.

What I like about Halloween is that we are connecting with the community. Okay, you could be cynical and say that we’re just getting lollies for free. Well, maybe. Usually we give out as well but atm with hubby away, it was logistically too difficult to both give out sweets and accompany young children.

I loved meeting people who lived just around the corner from me and saying hi.  We came across so many parties (I’m assuming they had COVID-safe plans).  I thought they wouldn’t think giving lollies to kids was so cool, but they were all prepared with big bowls of lollies. When I remarked that their party looked awesome, one guy said he and is partner had just gotten married!

And as for my kids and I, we were actually connecting.  They were chatting and laughing, and hanging out with a good friend (the one in the skeleton).  We were all talking to each other about where to walk to, whether to go home and out of the rain, as well a talking to neighbours.  Once the presents are open on Christmas Day, we don’t actually interact as much.  Except for when I make them sing Christmas carols!

As a frugalista, you might think: why does she spend money on outfits?  Actually, I don’t really – although I’ve learnt over the years that costumes can actually be okay value wise.

My outfit – black dress and witches hat – were both gifted from friends at a clothes party swap. I just put the two together.

The wolf costume (part of little red riding hood), was also gifted. The vampire (originally supposed to be phantom of the opera) was bought four years ago and my eldest has worn it on Halloween every year.

The past two years, my youngest was a storm trooper.

He’s grown out of it now (actually both of them a there were two).  The first year, it was a bit tight and we, ah, saw a bit too much. He was too young to make a fuss of it but we wondered at his comfort (he refused to change).  The second year he wore the larger one but no way he can fit that now.

I offered it instead on my Buy Nothing Project group and gave both away to the dad of a four-year-old girl. May it bring her lots of laughs and lollies.

This week, I picked up another jigsaw puzzle – this one fittingly enough of pumpkins!  I’ve also noticed the wedding puzzle I gifted has been regifted twice in my Buy Nothing group. Love it!

Do you do Halloween? Why? Why not?