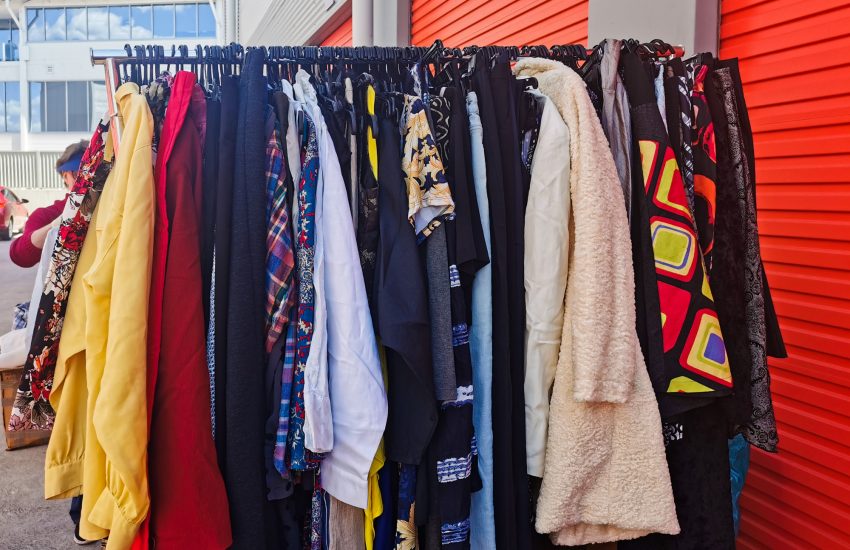 I gave away a big haul of clothes to support the annual Preloved Fashion Sale run by the Zonta Club of Canberra Breakfast.

Around a month ago, I held a clothes swap. I am always amazed by the abundance of clothing that people bring – and what gets left behind. I usually aim to give away around ten items. At first, I thought that would be hard but now I’m averaging around 20 (like last one).

You would think that would help with minimising the clothes stored in my cupboard, the spare room, a suitcase containing winter clothes and the four bags of clothes under the bed. But no, I often end up receiving even more back than I give.

Receiving abundance was certainly the case with this clothes swap. It was such a blessing.  A good friend, who is a similar age, height and shape as me, turned up and said “try on these jeans, I think they will fit you.”

She must have heard my prayers.  My favourite pair I had worn for years had just ripped in an unfortunate place, and I decided to turf them rather than pay to get them repaired.  “You know you can throw some things out,” hubby said.  But still I felt super guilty. Then a week later, my good friend Trish shared how she is making aprons from old jeans. Doh! I wish I had known that before I threw mine out.

You might wonder why I hadn’t just gone out and bought a new pair. Well, I had put on a bit of weight during COVID. I’d reduced some through jogging, but then put it on again after my Nana died.  I’m currently on the CSIRO diet, but until it works, I couldn’t think of anything worse than going shopping to try on jeans that probably wouldn’t fit me. So these jeans my friend brought – which fit me exactly – are such a blessing. Ask, and you shall receive.

After everyone left, I had that moment of feeling a bit overwhelmed with what was left behind.  My friend, Aranka, and I went through all the remaining items trying on some items and thinking about what we might like.  I then carefully sorted the clothes, setting aside some high end fashion labels to give to Zonta.

I joined the Zonta Club of Canberra Breakfast (ZCCB) 18 months ago. It is a service club that empowers women. It’s flagship annual event is it’s Preloved Fashion Sale, which raises money to support women (e.g. kitchen packs for survivors of domestic violence moving into permanent accommodation, scholarships for women, and birthing kits for women giving birth in developing countries).  This year it was super lucky that its 13 March event went ahead.  Australia effectively started closing down from Monday, 15 March onwards.

ZCCB stopped collecting clothes during COVID, and it already has a lot (and I mean a lot) collected by members and friends. But it has just started sorting again, with its COVID-safe plan in place and processes to avoid the risk of contamination.

After my clothes swap, three friends contacted me asking if I wanted more clothes!  I laughed a bit as I had so many already. But my good friend, Melissa, turned up a week later with four bags of quality suits and corporate wear that a neighbour had gifted her.  I knew I was going to a Zonta sorting day at its storage facility, so I took them with me.

I literally filled the entire back of my station wagon with clothes, shoes and accessories. There was a lot of stuff!  We didn’t sort it straight away, as the bags were labelled and must sit for at least 72 hours before handled.  But I did stay and sorted through other stuff that people had donated. There were so many beautiful things!  I must say that, even though I already have an abundance of clothing, I really wanted to take most of it home. I’ll just have to wait for the next sale.

Zonta is not actively collecting clothes as it’s still sorting through what it has, but if you would like to donate any quality clothing and if you live locally in Canberra, let me know. Otherwise, hold onto it for now.

At least 100 items of clothing and shoes gifted to the Zonta Club of Canberra for its Preloved Fashion Sale.