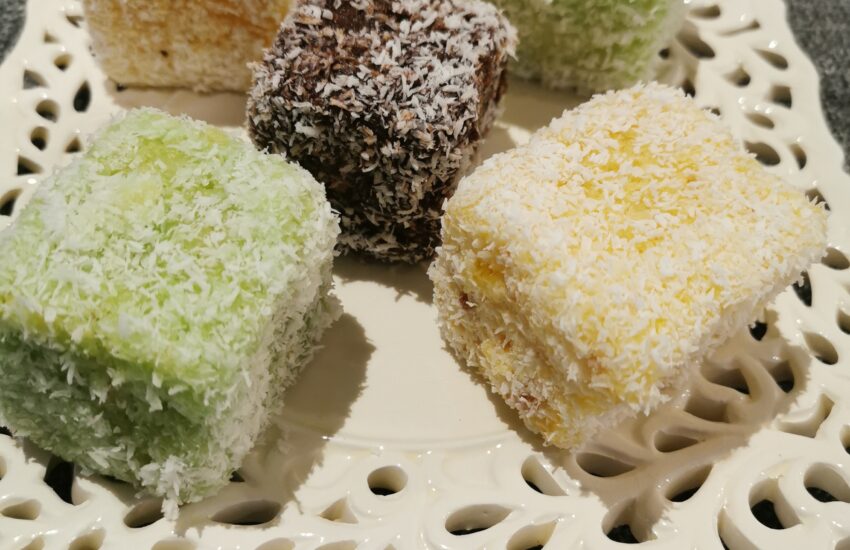 It’s almost Australia Day, which for many means back to work and back to school. How did that happen so soon? I wonder every year.

Our family baking tradition is to make lamingtons. Do you like to bake them on Australia Day?

Before I share my recipe, I wanted to reflect on the cultural origin of the lamington.

According to the memoirs of Lady Lamington, wife of Lord Lamington who served as Governor-General of Queensland from 1896 to 1901, the lamington was created by their chef,  French-born Armand Galland. Galland allegedly created the lamington to feed a hungry crowd at short notice. Galland’s wife was from Tahiti, so it is likely he was inspired to use coconut through her. (Another story is that Galland accidentally dropped some sponge cake in chocolate sauce and covered it in coconut to hide his mistake.)

The Australian – in fact, Queensland – origin of the lamington is strongly supported by Professor Maurice French AM, Emeritus Professor at the University of Southern Queensland, who wrote a book called The Lamington Enigma: a study of evidence.

But what about the New Zealand claim?

This is largely based on a 1 April 2014 article published by The Guardian, which quotes Dr Arun Silva of the centre for academic knowledge, excellence and study at the University of Auckland. According to the article, Silva said that Lord Lamington had visited Wellington in 1895 and had been served a cake covered in chocolate and coconut to symbolise mountain peaks. That cake was called a wellington. Many have suggested that the 1 April article was, in fact, an April Fool’s joke. My own Google search of Dr Silva could find no reference of him working at, or having worked at the University of Auckland – nor reference to the oddly named ‘centre for academic knowledge, excellent and study’. Of course, it’s possible that Dr Silva did work at the University of Auckland but there is no longer an online record.

I’m personally not big on articles that claim a certain food is ‘owned’ by a certain culture – except, perhaps, where it was clearly created by a particular chef or food writer. What is wonderful about food and cultural tradition is the way that recipes change and adapt depending on which kitchen they are cooked in. I’m sure that scones, or pavlovas or even lamingtons are different in every single kitchen – and there are so many subtle variations. Think for instance of Middle Eastern pastries and how they have influenced things dishes like apple strudel – they’re similarity is not a coincidence. In Australia, we see how multiculturalism has transformed our diet. And I’m loving how bush tucker is now being embraced and I’m loving learning more about it. I rejoice in this constant shifting of culinary boundaries.

I wanted to create green and gold lamingtons for Australia Day. My eldest son was horrified.

“But mum, lamingtons are always chocolate!” he said. He wouldn’t even touch my green and gold creations. “Nope, nope, nope,” he said. “Chocolate ones are the best.”

At first, I thought chocolate would ruin the green and gold theme. But then, on reflection, I decided that making chocolate ones – as well as other colours – is a good thing (and not just to keep my son happy.) I’m big on diversity and post the 2020 #blacklivesmatter movement, I feel it’s particularly important to model it. And that includes cooking. So in the spirit of wishing for a peaceful, diverse and multi-cultured Australia, here are my multi-coloured lamingtons.