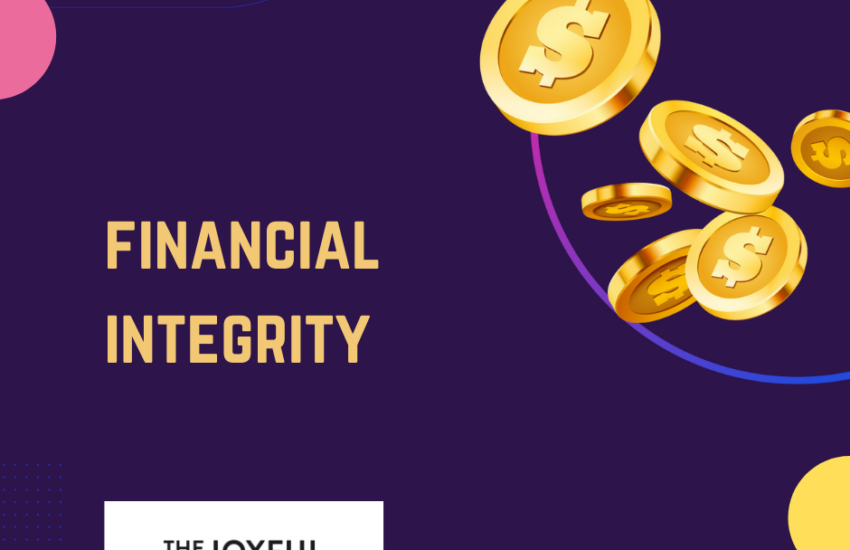 I’m a frugalista and you might think that means I would do anything to get a dollar.  But that’s not how I’m wired.  I’m committed to financial integrity – being honest and fair with all my money dealings – and I believe in the karma that comes from that.

My maternal grandfather, who we knew by the nickname of Woka, was an at times domineering man who had his vices – including a propensity for drink and violence.  In his later life, he became more of a family man, and I (being the eldest) was his favourite grandchild. I don’t really like to play favourites, but he did.  After his death nearly 30 years ago, I remain conflicted about my love for him and the more ignoble aspects of his character. But there was one character trait that everyone about him recognised: he was scrupulously honest in business.  And this is a strong value I inherited from him.

While it was before I was born, Woka used to run an army disposal store.  Later, he used to help my mum when she would sell off remaining stock at her factory and I got to observe him in action.  He was a no bull shXt guy -but was always honest.  He never tried to short-change people at those sales or measure up fabric that was a bit short.  He believed in honesty in business, and so do I.

Some people believe that in life and business, it’s all about ‘winning’ at any cost. As a former diplomat, I’ve read Niccolò Machiavelli’s work, The Prince, which posits that it’s all pretty much about getting ahead using the dark arts. And that sounds fine, but in my experience, things don’t always work that way.  Many successes are about relationships, and relationships are built on trust.

If you are doing business with someone, they watch and notice how you act. You might think no one notices that you are consistently a few days late with paying, or that you aren’t producing invoices when asked. Or that you sold a service or product and it wasn’t quite what you said it would be.  Or that you borrowed a small amount of money and didn’t pay it back (or had to be reminded).

Ah, but they do notice.

People might forgive you at first.  They might be your friend, part of your networking group or they might think you are a nice person.  They might trust that you would get around to it eventually, but it doesn’t mean they didn’t notice.  They have noticed, and it is something that is slowly eroding the respect in which they hold you.  They may start to question other aspects of your business or friendship – not just the money but other things. And when they are not happy, they will likely tell others.

Money is a measure of trust

There is no greater litmus test for trust than how you handle money.

Yes, money isn’t everything. But bad handling of money issues can kill friendships, divide families and dissolve business partnerships like nothing else.  Think about it: if there’s a dispute over a will by someone being greedy, it’s not so much the money that’s at stake than the fact that the trust in a relationship has been torn apart.

Conversely, where there is a high degree of financial integrity it opens doors.  I’ve been given discounts, bought properties at reduced prices (even when I wasn’t the lowest bidder) and even received things for free – all because I acted with integrity.  I pride myself on paying bills not just on time, but early.  Where possible, I pay small businesses on the same day.

I’m not perfect. Sometimes I miss bills hidden in my inbox, forget to hit ‘confirm’ on my online bank, or just stuff things up.  But I don’t steal towels in hotels, I don’t find cunning ways to skim things for myself, and if I take money from someone for a service, I deliver or refund if I can’t.  If I forget to pay something, I know that this isn’t my usual behaviour with money so I immediately put it right (easy as I have an emergency fund).  I sleep well at night knowing that I am committed to acting with financial integrity.

If you have to ask, it’s too late

If a customer has to ask you why they haven’t received a service, product or promised refund, it’s too late. Let me say that again: if someone has to ask you why you haven’t done something you should have, you have already lost them. If you try to argue or plead your case – or worse, blame them for asking – it just makes it worse.

No one should ever have to ask a business owner why they haven’t received what they paid for, or a promised refund. By the time they contact you, they have probably already given you the benefit of the doubt and waited for a while. The solution is to fix the problem and communicate when and how you are going to fix the problem.  Apologies are good, but action is better.  Saying something like ‘trust me – I would never just keep your money,’ is going to make people distrust you more than trust them.  The fact they have had to ask means they already have a seed of doubt in their mind.

Yes, I’ve had times I’ve stuffed up with things and I’ve had unhappy customers. I run an AirBnB and, while a recent customer told me she nearly cried with happiness when she checked in and realised how comfortable and well-appointed it is, not everyone is so nice. Maybe they were having a bad day and wanted to take it out on me. Maybe they thought it was going to be the Hyatt rather than a one-bedder in the suburbs. Maybe they were racist and didn’t like the (South Asian) neighbours. Or maybe there were things I could have done better and that affected their stay.

The customer isn’t always right. Some customers are wrong – and some are downright nasty. Some people use a strategy of complaining to get an upgrade or better services (no, I don’t suggest this).  And yes, our towels tend to disappear and it’s a mystery as to where they go.

But arguing with your customer, trying to make them wrong, getting angry with them for speaking up (or worse, blaming them for making you feel bad) is going to fail.  It’s going to fail miserably, and especially in their digital world where people can be peer-reviewed, it’s not going to go well for you.  If you haven’t delivered or done what you said you would, do not make excuses.  Do not blame your customer. Apologise, refund or make amends, communicate what you have done or are doing and move on.  Don’t spend time trying to win over those that are not aligned with your heart-centred business; just act with financial integrity.

I recently had someone send me a message because they were not happy on my Six Weeks to Abundance course. I received it on a day when I was feeling a bit off-centre about something else.  It put me into a bit of a tailspin, but I didn’t respond by telling them how fabulous I was as a course facilitator and why they were wrong. I concentrated instead on working with my other attendees to make it a fabulous course (the final week was amazing).   I also offered a full refund and was somewhat gobsmacked when the person was thankful and joyous at the offer. It turned out they were going through a difficult time dealing with things I couldn’t have known about. Their message to me was a cry for help.

COVID has, as everyone knows, disrupted businesses – especially small businesses. In many cases, people have had to postpone things like in-person events. Small businesses have done it tough, and most people are understanding. For the most part.

But everyone has gone through trauma during the last few years.  And our lives have changed. If someone paid for a trip or conference back in 2019 or 2020, you can’t assume they will still want it now.  They might have gotten a new job and can’t take leave.  They might have had a baby.  They might have moved to a regional area.  They might have money troubles they didn’t have a year or two ago. Or they might no longer be interested in attending. You can’t just assume that because we can do in-person events now that they will just be okay with things. You need to take them on the journey with you and understand if their itinerary has changed.

If you have taken someone’s money and not yet delivered a service or product, it’s important that you continue to communicate with them regularly.  They need to know when things are going to be rescheduled, or when things will be happening. And always keep that door open for refunds.

And conversely, as a consumer, if you want businesses and events in your community to still be there after natural calamities and pandemics, you need to support your small businesses. You need to use your purchasing power to keep them afloat now, not just to say ‘how sad’ when you notice their shopfront is no longer.

The karma of doing the right thing with our money

Yes, there is amazing karma from doing the right thing with our money and being in integrity.  I remember when my mum was in business that her client that paid in seven days always got the best service (and discounts).  Last year, I had an AirBnB guest who had over 50 five-star reviews – I went the extra mile with fresh flowers and home-baked goods.  And most conferences will offer early bird offers to those who secure tickets early.

And then of course there is the ability to get tradies in. One of the hardest things about the work of tradies is getting paid.  Everyone wants their services now, but not everyone is willing to pay them. If you have a reputation for paying promptly, you will get the best service.