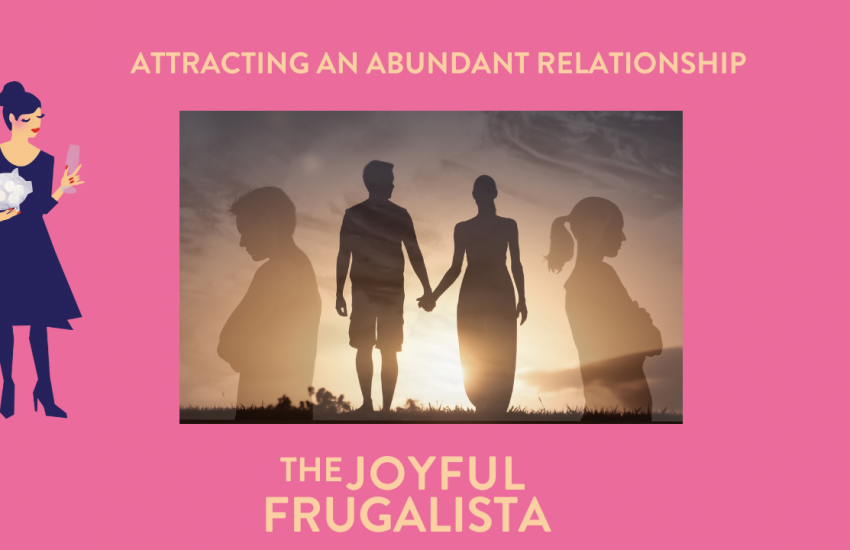 You’ve heard that a man is not a financial plan, right? But it’s important not to completely dismiss the importance of your current (or future) romantic partner in creating your financial future. Making the right choices regarding relationships is still incredibly important to achieving your financial goals, whether it’s attracting an abundant mate or avoiding being scammed.

As many of my readers may know, I separated from my first husband in 2014 after experiencing domestic violence. While I was blessed to have a solid public service job, it was still an expensive and uncertain time. I lost a third of my super, we sold real estate investments at a sub-optimum time, and I spent probably around $100k in legal costs. I estimate the separation set me back at least five years on my financial path – possibly more. A silver lining was that period formed the basis for The Joyful Frugalista. When life gives you lemons, you make lemonade, lemon curd and preserved lemons (to name a few recipes off the top of my head).

When I left my first marriage, I consciously channelled love. While I was scared and uncertain about what the future would hold, I knew I wanted to attract a loving relationship. It took three years (almost to the day), but in 2017 I met my husband, Neil. We were married in 2018, and while our relationship is not perfect, we are still very much in love.

Both of us went through the whole single, online dating thing. And at the time, online dating was still somehow thought of as a bit desperate or unsafe. Things have changed now, especially due to COVID. I’m no longer actively looking for a new relationship, but I was keen to delve into this topic on my podcast with intuitive life advisor and relationship expert Suzannah Galland.

Suzannah Galland is a British-born empath and internationally acclaimed life advisor, who has written for publications including Huffington Post, Harper’s Bazaar, Thrive Global and Medium.  She’s also been featured in Forbes, Vogue, New York Magazine, USA Today and is co-author of Goop’s The Sex Issue.  And she has appeared on the Today Show and is a frequent guidance expert on America’s Next Top Model. (So basically, she knows a lot about relationships.)

Is Suzannah jaded about relationships? Not at all. Throughout the interview, she was optimistic about love and committed relationships. ‘The glue, the thing that makes this world the happiest, is love, is children, is families, is good friends – people memories’, she said.

But it’s not as easy as you might think in this technological age to attract a good quality romantic partner. ‘If you want a soul mate or want a serious relationship – and there are many different types of soul mates you can attract – make it a mission,’ she said. ‘But don’t let it prioritise your life.’ At the same time, it’s super important to ensure that your intention is clear and that you’re coming from a happy place. Like attracts like, so if you want to attract happy, positive energy, you need to have it yourself.

I can totally relate to this. When I was looking to attract a new life partner, I was conscious of espousing a ‘gold standard’ in terms of my own ethics and morality. I wanted first to lift myself up to be the best person I could be. When I met Neil, he joked that he wasn’t just gold, he was platinum! But quite seriously, he did say that what he found most attractive about me was my positivity. We shared a lot of laughs and by the time we started dating, he was already my best friend.

How to marry a millionaire

There was a time when a woman’s financial plan was to marry well (queue here the 1953 movie How to Marry a Millionaire,starring Marily Monroe) It’s easy to laugh at this and dismiss it as Jane Austenesque, but looking for a wealthy mate to provide is still considered sexy.

And in a way, this isn’t wrong. Who doesn’t want to have a relationship with someone good with money? Love is love, and the first time around, I married someone who I had met as a student who (like me) didn’t have much money. But having rebuilt financially after my divorce, I wasn’t keen to get into a relationship with someone poor (or worse, in debt) – especially since I have kids to provide for. The problem is that women can easily focus on attracting a man as their financial plan rather than saving and investing in themselves.

According to Suzannah, it’s important to work on your relationship with money before you go and look for someone else. ‘If you’re struggling, and you’re worried about the pennies, and you find a wealthy man – they will know when they are being used,’ she says. This is consistent with research that shows that one in ten Australians were dumped by a partner because they were not good with money.

Instead, it’s important to look at your own life. When you are feeling abundant, that’s when you will attract an abundant partner – not when you’re broke and miserable. ‘We need to have much more confidence to see our lives bigger or feel more empowered,’ Suzannah said.

And if you think about it, as like attracts like, you are more likely to attract an abundant mate if you are abundant yourself. If you are interested in finances, you might be reading about financial topics or hanging out in groups that discuss finance and investing. Who knows, you might end up meeting someone through an online forum or at an in-person financial event (such as #fincon, which I recently attended). Or, if you are dating online, showing an interest in saving and investing is likely to attract you to people who are also interested in saving and investing. Again, like attracts like.

This brings me to online dating. It’s a jungle out there! I learnt quickly, back in 2017, that pretty much anything goes. And while I’m not prudish, I felt uncomfortable about many of the things I came across in the online dating world.

Suzannah says that the pandemic has led to online dating becoming even more dangerous – especially due to a proliferation of online scamming. People looking for love are often emotionally vulnerable (I know I was), and they are open to exploitation. With this having the courage to state your intention about being in a genuine, loving and committed relationship is key.

Suzannah advises people to avoid giving out information on their finances. (I know I talked above about a general love of saving and investment – don’t share how much money is sitting in your bank account.) ‘Basically, if someone’s asking you how much money you have in your savings, or they come up with a drama in a very short time asking you for help, and can they borrow and they’ll give it back, walk away,’ she advises.

If you suddenly needed money, who would YOU ask? Would you ask someone you had only recently met online and who you had never met in person? Or would you ask family and friends? Most people would ask those they knew and would feel too embarrassed to ask someone they had just met.

Back in 1997, I had just started studying in Taiwan, and I was short on money. I was there on scholarship, but the scholarship funds were two months late. I had a virus and needed to see a doctor. And I was scared because I was overseas and didn’t have money. I thought about asking my boyfriend back in Australia (who later became my first husband) for a loan. He was from Taiwan and had a local bank account. We met in Australia and started dating shortly before I left for Taiwan. But while I told him of my predicament, I didn’t ask. I worried it would look like I was a scam artist or put our fledgling relationship off to a bad start. And if you do genuinely care for someone that you are not yet in a committed relationship with, you are not likely to abuse that relationship. Even if you are in need.

You can say no. But Suzannah warns that a scam artist won’t take no lightly. ‘They’ll go – I totally understand. I would NEVER. This was so hard for me. You’re so special. Oh, I feel terrible.’ They’re sophisticated and have practised what to say. The best strategy is instead to walk away.

The good news is that love is possible. And the other good news is that when you are in a positive relationship with someone who shares the same values, including money values, magic can happen. I know this as true. I credit many of my recent successes, including having two books published and a successful podcast, directly to the love and support of my second husband. And that’s only one example of how being in a good relationship has augmented my money journey.

Have you ever had a bad experience with online dating? Have you ever been conversing with someone who asked for money online? How did you deal with it?